So how's your perspective?


I don’t know about you, but I had a week. It was seven days like every other week, but there was a lot that happened in those seven days. It was a week. Last Sunday afternoon, it was evident that I had not worn enough protection when pulling weeds, and I got an outbreak of poison ivy. Then I got a little cold. Tuesday I went to the dentist, and I don’t really know anyone who comes out of there with confetti and a ticker-tape parade. I ended the week with a physical. Most people get the news that the numbers that are supposed to be high are too low and the numbers that are supposed to be low are too high. It was a real ego trip of a week.
And on top of all that, I get THIS GOSPEL passage to preach from!
Like I said, it has been a week… and I wouldn't have traded it for anything in the world.
My poison ivy came from the fact that I am blessed to live in a house with a yard, and that I am healthy enough to cut the grass and pull the weeds. I don’t like the weeds, but I’m grateful that I’m healthy enough to do it.
I picked up my sniffles and scratchy throat either from one of the three amazing, loving people I live with, or my outstanding colleagues, or it’s just allergies, which is part of this amazing weather that we've been having. Either way, it was because I was among other people. I am blessed that someone came up with Advil Cold & Sinus.
My trip to the dentist wasn’t all bad. Wasn’t all great, but I do tend to enjoy the conversation, such as it is, with my hygienist.
And for all the poking and prodding and blood drawing (I don’t really like needles either) and telling me how to be better, some of those numbers that were too high last year when I had a physical are a little lower.

See, it’s all about your perspective. It’s about which side of the coin you want to look at.

Remember that this passage from Luke is not a random speech by Jesus that the writer of the Gospel just plopped in there. The Pharisees, who were loves of money (and I dare say lovers of the comforts of the world) were listening intently to what Jesus was saying about this rich man and this poor man, Lazarus. The story might seem like a hyperbole, an exaggeration, but not by much.

When the Rich Man and Lazarus are both in their respective eternal dwelling places, the Rich Man still doesn’t get it! He addresses Abraham to direct Lazarus to do his bidding. He still can’t see Lazarus as a human being, as another Child of God, or as a Child of Abraham. His perspective is that Lazarus is poor and sick and clearly beneath him.

Even in the depths of his torment, I would contend that his perspective has not really changed. He has not repented of his sin, which manifested itself in his contempt of Lazarus. He still thinks of Lazarus as “less-than,” so much so that he does not speak directly to Lazarus. “Abraham, tell Lazarus to dip his finger in water to cool my tongue.” Or “Send him to my brothers to warn them!”
Really, Rich Man, is it so terrible to speak to a poor, homeless man?

I’m willing to bet that Jesus’ listeners got the point, even the Pharisees. Care for the poor and the “less-than” in society is a basic tenet of Jewish teaching, grounded in the Laws of Moses in Deuteronomy and Leviticus. Those who heard this parable knew the right thing to do, even if they weren’t always practicing it.

Here’s what else they heard. They heard this great irony of Abraham being the one whom Lazarus was with. The irony is that in Genesis, Abraham is recorded as one of the wealthiest people in the world. He had more land than anyone else. It’s what he did with that land that counted. He welcomed in the poor and the wanderers and those who had no place else to go. THAT is the difference between Abraham and the Rich Man in our Gospel Lesson!

It sounds like the community to which St. Paul is writing is wrestling with similar questions and perspectives. It’s important to note that St. Paul (not Shakespeare!!) said, “the love of money is the root of all kinds of evil,” not simply “money is the root of all evil.” It’s not the dollar bills that are bad. It’s the unquenchable thirst to have more dollar bills than the next person, and to gain those dollar bills at the expense of others, that gets us into trouble.

Again, it’s all about perspective. Paul urges Timothy, and those in Timothy’s spiritual care to “shun all this.” (Great line!) Pursue righteousness, godliness, faith, love, endurance, gentleness. (vs. 11).

Verse 12 is my favorite from this passage: “Take hold of the eternal life, to which you were called and for which you made the good confession in the presence of many witnesses.” New Testament scholars believe this “confession in front of many witnesses.” was either Timothy’s ordination or his Baptism. I like the idea of it being his Baptism because not all of us are called to be ordained, but in our Baptism, and at every Baptism, we each make a promise that our perspective will be beyond ourselves, that our sights will be set on God our Creator, Jesus our Redeemer, and the Holy Spirit our Sustainer, and that our actions will be towards building up God’s people and God’s Kingdom on Earth.

We pledge to seek and serve Christ in all persons, which means we don’t see anyone as less than us. And we promise at each Baptism to strive for justice and peace among all people, respecting the dignity of every human being.

We commit ourselves to do these with God’s help, because we believe and we know, we cannot do these things on our own. We’ve all seen what happens when humanity is left to their devices.

If we put our trust in God, we can seek and serve Christ by helping those whom society sees as “less than.” With God’s help, we can be rich in good works, generous and ready to share, so that we take hold of the life that really is life. (I Tim 6:18)

Alan Paton, a South African author and life-long Anglican, penned this prayer in the early days of his country’s struggle to end Apartheid:

O Lord, open my eyes that I may see the need of others, open my ears that may hear their cries, open my heart so that they need not be without comfort. Let me be not afraid to defend the weak because of the anger of the strong, nor afraid to defend the poor because of the anger of the rich. Show me where love and hope and faith are needed, and use me to bring them to those places. And so open my eyes and my ears that I may this coming day be able to do some work of peace of you. Amen.

My favorite piece of trivia (that didn't make it into the sermon) is that Lazarus is the only person in any of Jesus' parables that is given a name. There isn't much said about why he has a name and other characters (Good Samaritan, Prodigal Son, etc.) are nameless. Lazarus comes from the name Elezar, which means "God helps" and gives some extra grounding to the story.

A wonderful image of the story, courtesy of  Codex Aureus Epternacensis (the Manuscript of the Golden Gospels) 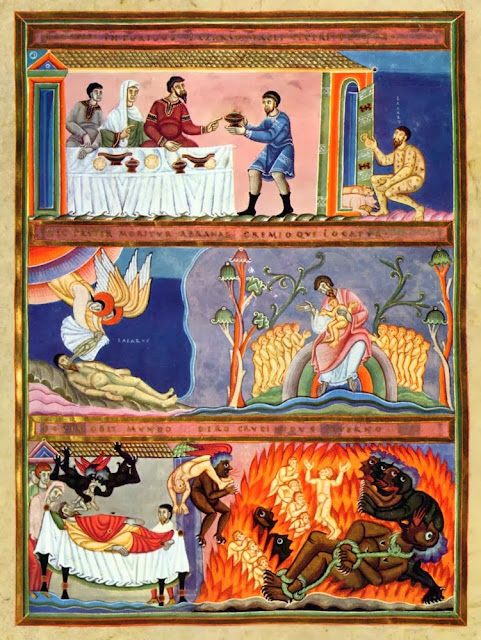 Be sure to check out David R. Henson's take on this passage as well. It can be found here.